After graduating from the U.S. Naval Academy, I attended graduate school at the University of Texas in Austin earning a degree in Computer Science. I then trained in naval nuclear power and served on the submarine USS Connecticut (SSN22) deploying to the Arctic and North Atlantic. My next duty assignment was on submarine headquarters staff in Japan where I enjoyed traveling throughout the Western Pacific and Persain Gulf. After leaving the Navy, I worked as a defense contractor for a few years before starting medical school at the University of Maryland. 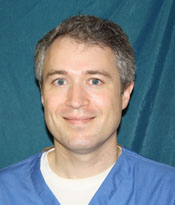