There have been a variety of case reports that have been describing the effects of lipid emulsion therapy on severe hemodynamic overdoses. As time has gone on, we have realized that this therapy is not for all severe overdoses. The type of medication and its pharmacokinetic properties factor into the decision. There is minimal evidence and no ideal randomized control trials that will tell us what the right answer is but take beta-blockers for instance:

Propranolol - very lipophilic and one of the few beta-blockers that can cause widened QRS, seizures as well as the prototypical hypotension and bradycardia.

Because of its lipophilicity, ability to cross the blood brain barrier and ability to cause lethal dysrrthmias, lipid emulsion therapy has been effective in reversing the clinically severe effects of a propranolol overdose. [2]

There are some studies that have shown that NSTEMI patients have done worse when administered opioids. Most studies were not well controled and the exact mechanism was not clear. This study adds a biological mechanism to these fidnings.

Hobl et al. showed clopidogre concentrations delayt peak yhours, have overall decrease AUC and actually decrease active metabolites when morphine is administered IV. Morphine may not be the right choice in any ACS that receives clopidogrel.

Title: Patient has this CT Head - What is your diagnosis?

Patient has the following Head CT, what is your differential diagnosis? There are only a few characteristic toxins that can cause this type of finding on CT. 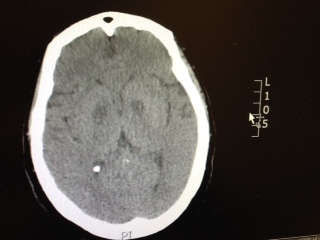 Hypoxia and Uncouplers of Oxidative Phsophorylation can cause this

Tetrodotoxin is lethal poison that blocks sodium channels. A famous sushi called "Fugu" is cut from a puffer fish that contains this poison. The idea is to get just enough of the toxin to cause peri-oral paresthesia but not too much to get seizures, paralysis and cardiac dysrrhythmias. A recent outbreak in Minneapolis, Minnesota was just reported in the MMWR so it can really happen anywhere, its a great read - dried puffer was bought from a market in NYC.

2-3 mg of the toxin is lethal to an adult human. No antidote exists though I would try hypertonic sodium bicarbonate for the cardiac dysrrhythmias and appropraite supportive. If the patient survives 24 hrs, the patient will do well without sequelae if appropriately supported.

The pattern of prescription drug abuse continues to center around semisynthetic opioids like oxycodone and hydrocodone. Federal regulations have now raised hydrocodone to a schedule II drug like oxycodone. Despite efforts, the slope for natural and semisynthetic opioids remains steep.  The ED measures of education, limit prescriptions for acute pain, minimize number of days/pills prescribed and utlize the prescription drug monitoring program are some basics that can assist you in better prescribing habits.

Tetracycline has seen an increase in utilization due to its effectiveness in MRSA (check your local biogram). Remember its adverse effects/toxicity:

5) Deposits in calcifying bone/teeth - do not use in pediatrics

When you prescribe certain medications, it may require some further instructions to avoid ethanol or a disulfiram like reaction (nausea, vomiting, flushing) may occur. Keep this short list in your brain:

1) Particular cephalosporins: cefotetan is a the one more likely

E-cigarette popularity has increased and with that another possible source of toxicity. The most recent MMWR shows how e-cigarette use has increased over the past 5 years. The general toxicity involves nicotine toxicity with nausea, vomiting, eye irritation as the major sources of toxicity. Only one reported death where the nicotine reservoir was accessed and then injected IV in a suicide attempt.

There are some reports of asthma exacerbations but is more likely due to the vapor flavor and not the nicotine.

Ondansetron is a highly effective anti-emetic that, since it has gone generic, is also quite inexpensive. There have been some reports of QT prolongation and cardiac arrhythmias especially with the high-dose 32mg IV dose for chemotherapy patients.

Is still safe in our ED population? A large systematic review was done in this month's Ann Emerg Med July 2014,p19-31.

1) No reports of arrhythmia associated with single dose administration identified

This is a must memorize simple table of the toxic doses of local anesthetics. Toxicity of local anesthetics starts with slurred speech, lethargy to seizures and lethal cardiac dysrhythmias. There should be zero tolerance to actual cause toxicity when repairing a laceration or performing a fascia iliaca block.

Treatment for cardiac dysrhythmias due to local anesthetics is 20% lipid emulsion therapy - don't follow ACLS protocol as epinephrine or other antidysrhythmics (especially lidocaine) will be lethal.

Title: What Drugs Are More Prone to Cause Seizure

Seizure is a very common effect seen in many overdoses.  Think about the following drugs which have a higher propensity for seizure as noted in a Swiss study of over 15000 patients and isolating to single drug overdoses:

The drug mefenanamic acid is not used much in the USA but citalopram, venlafaxine and tramadol as well as the most prelavent bupropion which was number one in the study are all commonly prescribed in the USA. Keep a watchful eye if you see any of these drugs on a drug list or as an overdose.

Title: Prescription Drug Monitoring Programs - Maryland has one, now what?

A recent article showed that District of Columbia's Prescription Drug Monitoring program (PDMP) did not change the amount of opioids prescribed after conversion to MMEs (mg morphine equivalents). It is surprising to see a varying effect of PDMPs across the USA. Some have seen dramatic decreases up to 60% in Colorado versus an actual increase of over 50% in Connecticut. Usability, lack of interstate connectivity and quality of information have been seen as rate limiting factors in the efficacy of PDMPs.

PDMPs, by themselves, are not the answer to prescription drug abuse but are an excellent adjunct. Maryland ACEP and a committee chaired by Dr. Suzanne Doyon, Director of the Poison Center, have developed Opioid Prescribing Guidelines and a Discharge pamphlet that can utilized by hospitals to assist with this epidemic. The guidelines and pamphlet have been endorsed by MDPCC, MDACEP, DHMH and a multitude of other Maryland state agencies. I have attached the guidelines.

What are characteristics that increase the chance a patient is at risk for opioid-related death? A recent JAMA article begins to tackle this very issues. Baumblatt et al. found the following:

1) Patient with 4 or more prescribers had adjusted odds ratio 6.5 for opioid-related death

2) Patient with 4 or more pharmacies where they get their prescriptions aOR - 6.0

With the new Maryland Prescription Drug Monitoring program (PDMP)  we can start looking at a patient's prescription drug use pattern. The recent JAMA article can help you identify patients at high risk to die an opioid-related death. Use the PDMP and be wary if a patient has more than 4 prescribers or pharmacies or has >100mg of morphine equivalents per day.

High-Risk Use by Patients Prescribed Opioids for Pain and Its Role in Overdose Deaths.

Acid and Alkali burns are all known for their caustic cellular injury to local tissue. Acid burns and specifically hydrofluoric acid has systemic toxicity. HF can be lethal even if there is only a 5-10% total body surface area burn. You can find HF in brick cleaner, glass etching and wheel cleaner. They main metabolic derangement is hypocalcemia which can lead to cardiac dysrrhythmias and death.

Treatment has ranged from IV calcium or even intra-arterial calcium in the affected limb to treat the local severe pain associated with an HF burn. Checking a serum calcium to be sure IV calcium replacement is also necessary.

Ondansetron (Zofran) is a great anti-emetic that, since it has gone generic, is also inexpensive. High dose ondansetron has been reported to cause QT prolongation and that practice is largerly discontinued now in the oncology world. Another uncommon adverse drug reaction may be dystonia. Though we think of ondansetron as a 5-HT3 blocker and should not cause the dystonic reaction like we see in metoclopramide, there are case reports of this reaction occurring.

If you are treating an alcohol withdrawal patient and benzodiazepines are not working, try dexmedetomidine (precedex). This centrally acting alpha-2 agonist was utilized in 18 ICU patients and was shown to be safe. Average diazepam dose was 193 mg IV and lorazepam dose was 9 mg IV in these patients. Haloperidol was utilized in 3 of these patients which is not an effective therapy for alcohol withdrawal (could worsen due to QT prolongation, decrease seizure threshold and anticholinergic effects).
Still requires further research and not sure about the physiologic mechanism dexmedetomidine would actually treat alcohol withdrawal aside from sedating. There is the added benefit of maintaining airway reflexes versus propofol. This case series shows the experience with this drug regimen.
1. Tolonen J et al. Dexmedetomidine in addition to benzodiazepine-based
sedation in patients with alcohol withdrawal delirium. Eur J Emerg
Med. 2013. 20:425-427.

Title: Bioaccumulation and the "Therapeutic" Overdose

Everyone has admitted an altered mental status, patient or bradycardic patient and all of your test results are coming back normal except for a mild increase in creatinine. Take a look at the medication list. Creatinine is a poor indicator of renal function and GFR may be severely impaired even with a mild elevation of creatinine. If you have a predominantly renally excreted drug, you can see toxic effects of a drug even if administered at therapeutic levels.

Altered Mental Status and on Keppra? Keppra is 100% renally cleared!

Ask your pharmacist for help with the medication list with renal or hepatic insufficiency.

Though an uncommon exposure, it can occur from chronic mercury exposure. One mode of exposure that I have seen is with elemental mercury thermometers that were broken to collect the beads of mercury - for entertainment. This occurred in a child's room and were forgotten.  One child presented with personality changes and pink hands and feet. The patient suffered from severe mercury poisoning and acrodynia due to prolonged exposure to the mercury vapor.

Irritability, shyness, photophobia, pink discoloration of the hands and feet and polyneuritis.

Title: Methoxetamine - A New "Legal" High from the Internet

A new drug is coming onto the drug scene with some case reports beginning to build. The internet appears to have been a major driver or mode of distribution for this particular drug.

One study of users showed that this ketamine analog has more vivid hallucinations that would liken it to LSD. It has been theorized that this drug has the dissociative effects of ketamine but also has prominent serotninergic effects making additions more likely and hallucinations possible.

If you see a case in your ED, you can say you heard it here first!

Title: aPCC for rivaroxaban and dabigatran

Reversal of the new anticoagulants rivaroxaban (Xarelto) and dabigatran (Pradaxa) has been challenging particularly in the ED setting with no definitive reversal agent. Intracerebral hemorrhage or critical GI bleed management becomes challenging and worsens mortality.

There is growing literature that states activated prothrombin complex concentrate or non-activated PCC may reverse these new anticoagulants. A volunteer study (1) showed its efficacy and concensus workgroups are now recommending aPCC as first line therapy(2).  The search goes on for a reliable reversal agent for these new anticoagulants which were suppose to solve more problems instead of create new ones.