Quick Dive
Many ED practitioners are not comfortable clearing the C-spine of mentally altered patients even after a negative high-quality CT scan. In 2015, the Eastern Association for the Surgery of Trauma (EAST) published an article that addresses this issue. The authors’ conclusion is summarized as follows: "In obtunded adult blunt trauma patients, we conditionally recommend cervical collar removal after a negative high-quality C-spine CT scan result alone. This conditional recommendation is based on very low-quality evidence but places a strong emphasis on the high negative predictive value of high-quality CT imaging in excluding the critically important unstable C-spine injury.” They went on to point out that adjunctive imaging after CT increases the number of low-value diagnoses, increases the possibility of unnecessary treatment plans, and increases risks for injured patients during transport to the imaging suite. However, they acknowledged that this approach could result in neurologic deterioration in some patients.
In 2016, the Western Trauma Association published the results of a prospective observational study that evaluated patients who did not meet the NEXUS low-risk criteria and who had a CT scan of their C-spine. Of the over 5,000 patients who had midline tenderness, only 3 had significant injuries that were missed by CT (those 3 patients had an initial exam consistent with central cord syndrome).
In 2017, the Research Consortium of New England Centers for Trauma (ReCONECT) calculated the rate of abnormal MRI after negative c-spine CT among blunt trauma patients who could not be evaluated or had persistent cervicalgia. MRI detected ligamentous injury, soft tissue swelling, vertebral disc injury, or dural hematoma in almost one-fourth of the 767 patients in this study. Only eleven (11) of them underwent cervical spine surgery, based on the MRI results. Because the clinical significance of the injuries remains unclear, the ReCONECT authors called for further consideration by trauma specialists and spine surgeons.
Conclusion:
High-quality CT of the C-spine catches most of the injuries that would require surgical correction, and MRI is not needed in most causes to clear the c-spine even in patients that are mentally altered.

(Please note the prior version of this pearl was incorrect with respect to the images referenced. This version is corrected.)

Title: What's wrong with this picture? By John Greenwood, MD 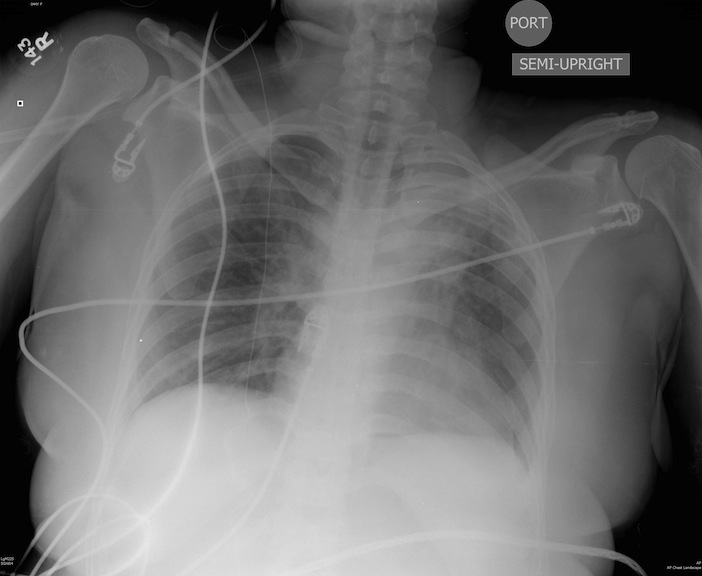 An apical cap is a unilateral or bilateral irregular density over the apex of the lung, generally less than 5mm. The lower border is often sharp but undulating.

Title: Lidocaine with Epinephrine and it use on Fingers and Toes

Lidocaine with Epinephrine and it use on Fingers and Toes

It has been taught for a long time that Lidocaine with Epinephrine should not be used on fingers, toes, ears and nose [There has to be a kid's song in there somewhere] due to the risk of vasoconstricition/vasospasm and possible digitial infarcation.

The short story is that this practice is not supported by the literature, and there are now numerous publications that have shown that lidocaine with epinephrine is safe for use on the finger tips.  It turns out the the original case reports were submitted with procaine and epinephrine and not lidocaine with epinephrine.  Most of the cases of digital infarction where with straight procaine that is now thought to have been contaiminated or too acidic pH close to 1 when injected.

The effects of epinephrine last approximately 6 hours. This time is well within the accepted limit of ischemia for fingers that has been established in digitial replanation.

So why use Lidocaine with Epinephrine:

Thomson CJ, Lalonde DH, Denkler KA, Feicht AJ. A critical look at the evidence for and against elective epinephrine use in the finger. Plast Reconstr Surg. Jan 2007;119(1):260-266.

Traumatic Ankle Pain When examining a patient who presents with Ankle Pain, make sure that you examine/palpate the proximal fibula and the base of the fifth metatarsal. Pain over the proximal fibula will necessitate a full Tibia/Fibula x-ray to rule out a Maisonneuve Fracture [a proximal fracture of fibula resulting from external rotation; injury may occur with medial or posterior malleolus fracture, a ligament rupture, as well as rupture of interosseous membrane. Pain over the base of the 5th metatarsal suggests a Jones Fracture [ involves fx at base of fifth metatarsal at metaphyseal-diaphyseal junction, which typically extends into the 4-5 intermetatarsal facet; is located w/in 1.5 cm distal to tuberosity of 5th metatarsal & should not be confused w/ more common avulsion fx (Dancer s Fracture) of 5th metatarsal styloid]