- Opiates are well known in their ability to cause sedation, euphoria, and respiratory depression, however are classically considered devoid of cardiac properties.

- Utilization of other less known drugs of abuse, specifically loperamide (peripherally acting μ-opioid receptor agonist) has been increasing in popularity.

- A surge in recent case reports has shown a potential causal association of loperamide with prolongation of the QTc interval and subsequent TdP.

- Toxic ingestion of loperamide leading to TdP has been successfully managed with standard TdP therapies (magnesium, isoproterenol, and pacing).

Giant cell myocarditis (GCM) is an infrequent, but often fatal form of acute myocarditis that has been shown to respond to cyclosporine-based immunosuppressive therapy

Patients are surviving longer without transplantation because of efficacious medical therapy

·      Cessation and/or reduction of immunosuppression are associated with GCM recurrence

Ventricular fibrillation during reperfusion in STEMI is an infrequent, but serious complication.

Increased risk for reperfusion Vfib is associated with: history of MI, aspirin and b-blocker use, Vfib before PCI, left main CAD, inferior MI, symptom-to-balloon time <360 minutes, maximal ST-segment elevation in a single lead >300 μV, and sum of ST-segment deviations in all leads >1,500 μV.

The sum of ST-segment deviations in all leads >1500 μV was an independent predictor of reperfusion Vfib.

The U-wave is a small deflection immediately following the T-wave, commonly with the same polarity as the T-wave and most prominently seen in precordial leads V2–V3.

Prominent U-waves are most often seen with bradycardia and hypokalemia, but can also be secondary to other electrolyte imbalances and medications.

Typically, T- and U-wave polarities are concordant; discordant U-waves have been identified several hours prior to other ECG changes in acute myocardial infarction.

Some studies note that exercise induced U-wave inversion is highly predictive of CAD; negative U -waves in the precordial leads during exercise had a higher specificity (88% vs. 70%) & positive predictive value (77% vs. 61%) for ischemia than ST-depression.

Reinig et al. 2005 showed that negative concordance of T- and U-waves have poor prognosis & is quite specific for ischemia.

- Cardiac Sarcoidosis (CS) is reported to involve ~2-5% of patients with systemic sarcoidosis. An increasing proportion of patients are presenting with isolated CS.

- Corticosteroid therapy is considered cornerstone in management, but evidence is largely observational and no randomized trials have been performed to date.

Title: The Heart Is Just a Muscle

The Heart Is Just a Muscle

- The role of endomyocardial biopsy (EMB) to aid in the diagnosis of new-onset heart failure is controversial and major society guidelines recommend against this procedure in the routine evaluation of patients with heat failure.

- Nevertheless when symptoms of heart failure persist despite conventional imaging modalities and treatment one must consider uncommon conditions, such as mitochondrial disorders.

- Mitochondrial disorders are characterized as clinical syndromes and patients can present with any one of the following: ophthalmoplegia, proximal muscle weakness, isolated myopathy with exercise intolerance and myalgia, severe myopathy of infancy or childhood, or multisystem involvement with myopathy.

- Myocardial tissue is highly dependent on mitochondria for energy production and is therefore susceptible to defects in mitochondrial function. Cardiac manifestations of these syndromes include both arrhythmias and cardiomyopathy.

- Pericarditis has numerous etiologies; in developed countries 80-90% of cases are idiopathic/viral & 10-20% of cases are most commonly post-cardiac injury syndromes, connective-tissue diseases, or cancer.

- Since pleuritic chest pain has many possible causes, pericarditis should be diagnosed with caution in the absence of other clinical criteria, additionally a friction rub & ECG findings may be transient making the diagnosis even more challenging.

- Data from a recent RCT indicated that pericardial effusions are present in ~2/3 of patients; the vast majority are small and of no concern, nonetheless an echocardiogram is routinely indicated and if present should be carefully followed to assess for tamponade.

- Treatment for idiopathic/viral cases of pericarditis consistents of NSAIDs & colchicine.

- Atrial fibrillation (AF) affects ~34 million people worldwide; the hospital admission rates vary with frequencies of 81%, 62%, and 24% in the US, Australia, and Canada respectively.

- Lack of a reproducible and accurate risk stratification/decision aid likely contributes to variability in ED disposition.

- Vanderbilt University Medical Center's ED (2010-2013) derived and internal validated an ED based clinical decision aid for prediction of MACE within 30 days utilizing the AFFORD decision aid in hemodynamically stable patients whose AF reverted to sinus rhythm, either spontaneously or after cardioversion (pharmacologic or electrical), and those who are adequately rate controlled and candidates for outpatient management.

- Incorporating AFFORD with a shared decision model into ED practice may help identify patients at low risk and potentially reduce rate of hospitalizations.

- Digoxin in the acute setting is often favored given its ability to reduce the heart rate while maintaining or slightly augmenting blood pressure.

- There have been 2 post hoc studies from the AFFIRM trial which showed conflicting results w/regards to digoxin and risk of mortality.

- A recent retrospective cohort examination of newly diagnosed afib patients without heart failure & no prior use of digoxin; digoxin was independently associated with a 71% higher risk of death & a 63% higher risk of hospitalization.

- Consistent and substantial increase in mortality and hospitalization risk was seen using both on-treatment and intent-to-treat analytic methods.

- Given other available rate control options, digoxin should be used with caution.

The Unforgotten: ECG Utilization to Differentiate Athletic Heart vs. Brugada

- The former raises problems of differential some forms of ER with the “ coved-type” pattern seen in Brugada Syndrome (BS).

- ECG analysis focused on ST-segment elevation at J-point (STJ ) and at 80 milliseconds after J-point (ST80 ). 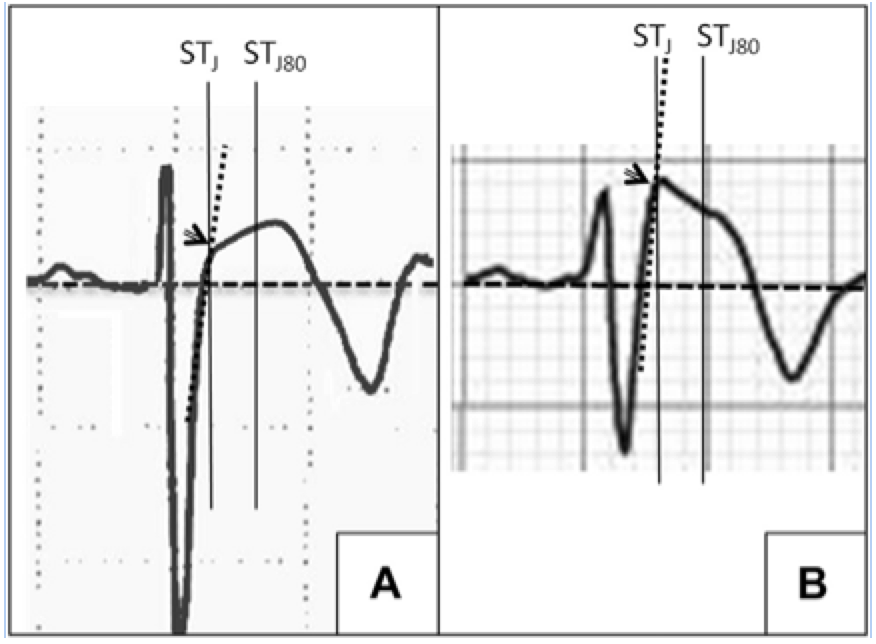 - In a study among 117,739 subjects with STEMI, 824 with PMI were more likely to present with cardiac arrest, cardiogenic shock, and congestive heart failure.

- The median time from arrival ECG to revascularization with PCI was longer among subjects with PMI.

- The median time from arrival ECG to systemic thrombolysis was also longer among subjects with a PMI.

- Increased awareness and recognition of PMI is needed to improve reperfusion times among this subpopulation with STEMI.

Associations between left ventricular hypertrophy (LVH) and both supraventricular (SVT)/ventricular arrhythmias (VT/VF) have previously been reported.

A recent review & meta-analysis of 10 studies (27,141 patients) revealed the following:

The reason for increased arrhythmogenicity in LVH is not clearly understood.

A consistently observed abnormality in LVH is non-uniform propagation of the action potential throughout the myocardium, which sets the stage for arrhythmias based on early or delayed afterdepolarizations.

Given the heterogeneity in this meta-analysis further research between LVH & sustained arrhythmias is needed to infer true causality.

The Acute Physiology and Chronic Health Evaluation (APACHE) scoring system was established in the 1980's to predict critically ill patient prognosis (APACHE II, III, and IV have been published in last two decades).

AHF in-hospital mortality data was analyzed and compared using APACHE II, modified APACHE II, and APACHE- HF scores and the predictive value of the APACHE-HF score was found to be optimal when compared to the others.

- The most common rhythm disorder is atrial fibrillation (AF), which usually converts to normal sinus rhythm within 24 hours and antiarrhythmic therapy is typically not indicated.

- Analyses of ECGs in patients who have consumed a large quantity of alcohol show prolongation of the PR, QRS, and QT intervals.

Brugada syndrome is an inherited arrhythmogenic channelopathy described by ST-segment elevation in the right precordial leads and an increased risk of sudden cardiac death.

There are 3 electrocardiographic patterns:

Type 3 - Either coved, or saddleback morphology with <2mm ST-elevation 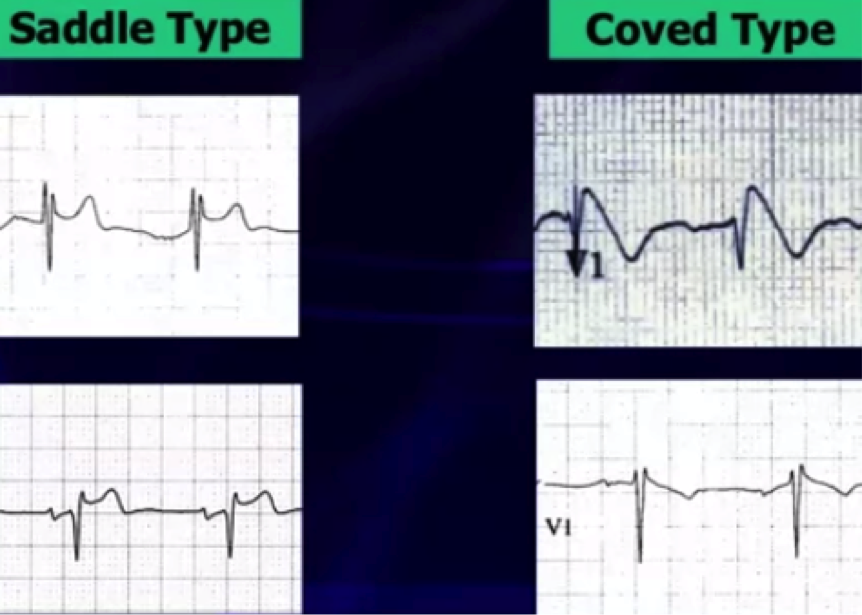 Type 1 pattern is often underestimated because of its sporadic/fluctuating appearance on ECG, which can be either spontaneously occurring or drug-induced (drug-induced variant has a more favorable prognosis).

Fever has been a well-documented culprit in unmasking Brugada pattern by increasing the sodium channel dysfunction & accelerating the late sodium current inactivation.

A recent study in a large population of patients with type 1 Brugada attempted to identify other patterns unmasking Brugada using 24-hour holter monitoring. * There is now evidence that there is a higher prevalence of type 1 Brugada pattern from 12pm-6pm & unmasking by fast and a large meal, showing influence by glucose intake and insulin levels.

Not So Benign: Benign early repolarization (BER) effects in STEMI

- Benign early repolarization (BER) has been associated with increased risk of sudden cardiac death and ventricular fibrillation (VF) in patients with and without structural heart disease.

- Acute STEMI is associated with high incidence of ventricular arrhythmias and the most frequent cause of sudden cardiac death in the adult population.

- BER has been associated with arrhythmogenicity, however the prognostic importance of this ECG finding in patients with STEMI has not been well elucidated.

- In a recent prospective study of STEMI patients, BER was associated with higher rates of in-hospital ventricular arrhythmias and mortality; It is an independent predictor of long-term mortality beyond well-known other parameters.

Predictors of Cardiac Rupture After AMI

- In the era of revascularization and aggressive cardiac care there has been a continual decline in acute myocardial infarction (AMI) mortality rates; however one of the most deadly complications, cardiac rupture (left ventricular free wall, ventricular septum, or papillary muscle rupture), still remains relatively stable.

- Cardiac rupture is an increasingly more frequent cause of death during AMI, thus a recent study retrospectively assessed the clinical and morphologic variables in those with and without cardiac rupture that were hospitalized for AMI.

- Cardiac rupture occurs most often in patients with an immense quantity of cardiac adipose tissue, the size of the left ventricular cavity is typically normal, and the area of the infarct is small.

- Heart failure patients with prior AMI have healed scar tissue and are at nominal risk of complications such as rupture if a subsequent AMI occurs.

Title: Patent Foramen Ovale: To Close or Not to Close

Patent Foramen Ovale: To Close or Not to Close

- Patent foramen ovale (PFO) is associated with a 3-fold increased risk for recurrent stroke, yet current guidelines only recommends “consideration” of PFO closure after a second cryptogenic stroke.

- Until recently the cost-effectiveness of PFO closure has not been described.

- Although PFO closure was found to be immediately more costly per patient closure, it reached cost-effectiveness at ~2.5 years of follow-up.

- Closure of PFO is both beneficial in terms of risk-benefit and cost-effectiveness strategy, especially as cryptogenic stroke typically affects the young.

Angiographic subclavian stenosis is defined as greater than 50% narrowing or greater than 20mmHg pressure difference across a lesion.

CSSS occurs in up to 4.5% of patients with prior CABG & common in older individuals with existing peripheral vascular disease.

Screening for subclavian stenosis prior to CABG w/bilateral noninvasive blood pressure assessment, and a 15 mmHg or greater discordance should elicit further imaging.

Percutaneous revascularization is the first-line therapy for CSSS and has excellent long-term outcomes.

- Both atrial/ventricular dysrhythmias contribute to the mortality associated with HF & control of particularly atrial fibrillation, is an essential part of the early pulmonary vascular remodeling process.

- Both endothelin receptor antagonists (ERA) and prostanoids have been effective for PAH & clinical trials utilizing these agents have also been attempted in treatment of PH due to left heart disease, but have proven to be either neutral or even detrimental.

- Selective dilation of the pulmonary vessels in patients with postcapillary PH, without simultaneously ensuring the unloading of the LV, can cause profound pulmonary venous congestion resulting in sudden pulmonary edema, which greatly increases the morbidity in patients with this form of PH.