Just as aspirin is pivotal in the treatment of acute coronary syndrome, medications such as beta-blocker, statins, and angiotensin-converting enzyme inhibitors have been proven to be essential in secondary prevention of AMI.

Patients after AMI are typically discharged on appropriate secondary prevention medications; however the prescribed doses are often far below the proven efficacy based on clinical trials.

A review of 6,748 patients from 31 hospitals enrolled in 2 U.S. registries (2003 to 2008) illustrated that only 1 in 3 patients were prescribed these medications at goal doses.

Of patients not discharged on goal doses, up-titration during follow-up occurred infrequently ~25%.

Optimal medication dosing and appropriate titration is integral to prevention of further morbidity and mortality.

First-degree atrioventricular (AV) block is defined as an abnormally prolonged PR-interval >200ms. Although traditionally considered to be a benign clinical entity, not all first degree AV blocks are treated the same.

Markedly prolonged PR-intervals (PR >300ms) can cause symptoms and hemodynamic compromise due to inadequate timing of atrial and ventricular contractions. Consider the following ECG from a 32 YOF with intermittent episodes of syncope and dizziness… 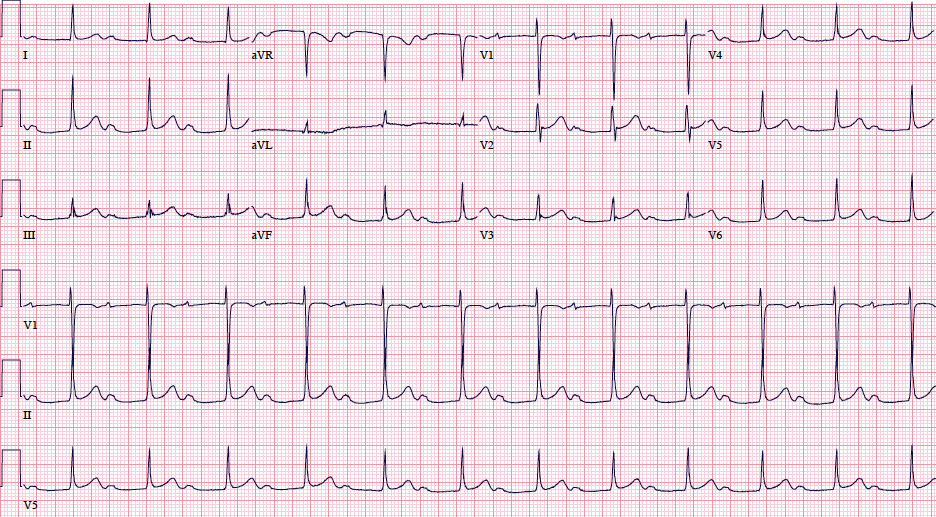 There is marked first degree AV block (PR=434 ms). When the PR-interval gets too long, AV dyssynchrony compromises ventricular filling and decreases cardiac output, similar to the so-called pacemaker syndrome.

Special thanks to Dr. Brandon Cole for submitting the ECG 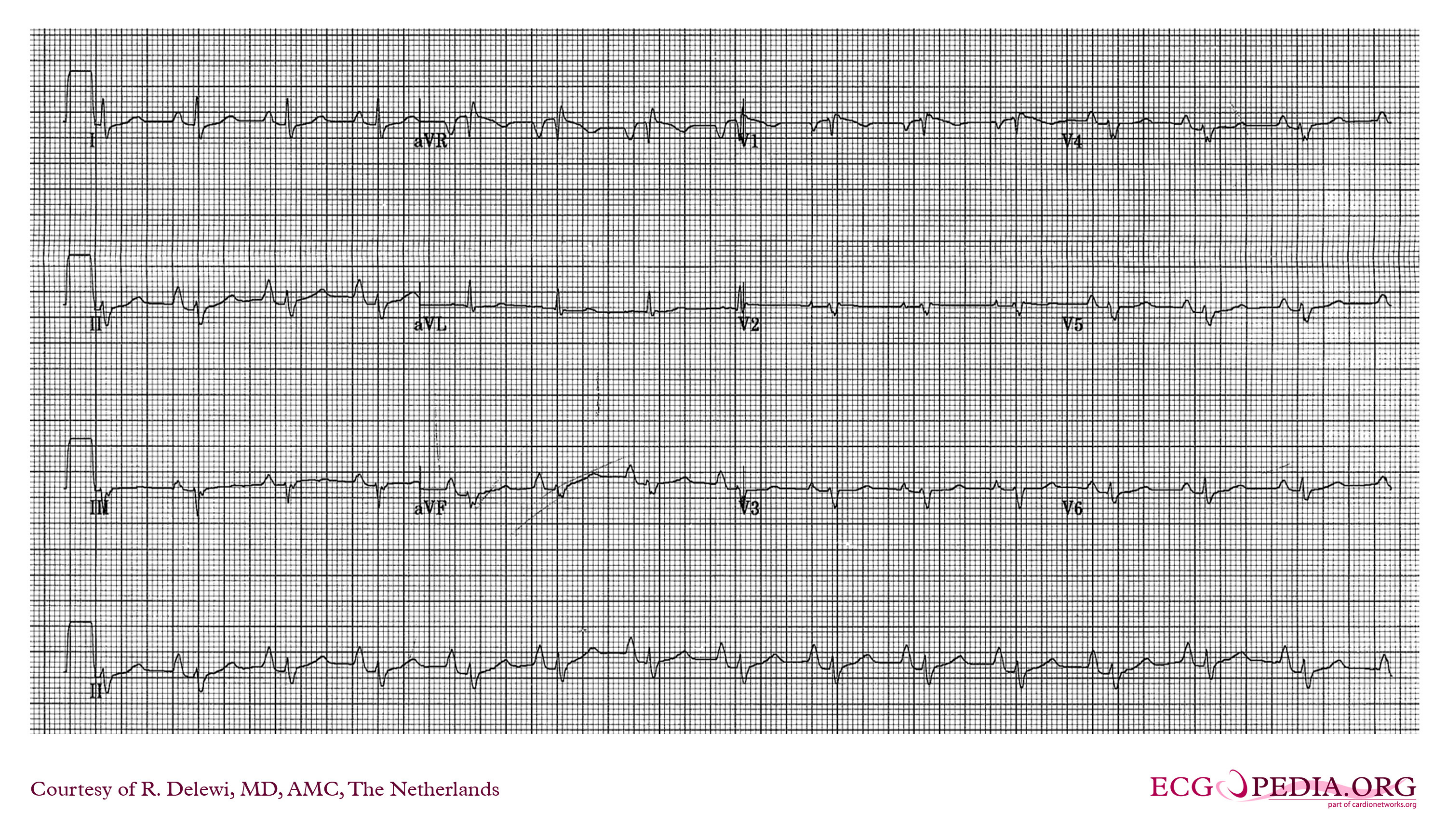 A 48 year-old female presents to the ED with progressive dyspnea and chest discomfort over the past 3 months. HR = 105, BP = 100/60 mmHg, with mild JVD on exam. Her ECG is shown below. What ECG abnormalites are present? What does your differential diagnosis include? What is the best initial diagnostic test? 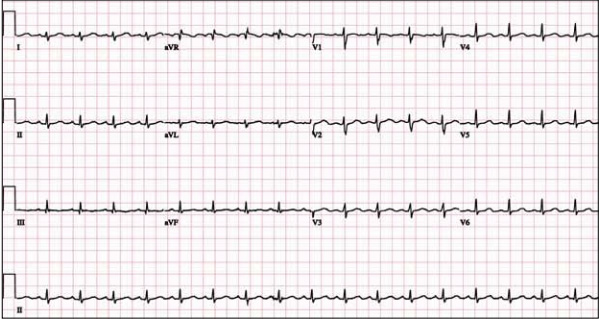 Classically, aortic dissection is considered the primary culprit in patients with chest pain that radiates to the back (aortic pain) or chest pain combined with ischemia (cerebral, cardiac, peripheral), syncope, or cardiac arrest. However, it should not be your only concern: the rate of aortic rupture is much higher in penetrating atheromatous ulcer (42%) and intramural hematoma (35%) than in aortic dissection (types A 7.5% and type B 4.1%).

Chest pain with concomitant ischemic symptoms and acute decompensation should prompt consideration of several etiologies under the umbrella of aortic syndromes and not limited to dissection :

The primary goal in management of STEMI is rapid coronary revascularization. STEMI's are occasionally complicated by ventricular fibrillation (VF) arrest. High quality chest compressions and early defibrillation will improve survival. But what can be done in cases where conventional ACLS measures fail and patients have shock-refractory VF?

Some have suggested that emergent PCI with ongoing CPR en route may be beneficial. This option may be considered in close consultation with cardiology if the arrest is thought to be driven by ongoing ischemia and infarction. However, definitive data is lacking and this has only been described in a handful of case reports.

There may also be a role for venoarterial ECMO to aid in perfusion of vital organs and limit the risk of multisystem organ failure. The ECMO circuit can also help facilitate therapeutic hypothermia after the culprit vessel(s) is revascularized and rhythm is restored.

Chances for survival are highest in younger patients, those that do not have chronic illnesses, and those who received immediate CPR after arrest.

A recently published case report (attached) presents a fascinating case where salvage PCI and ECMO were used for shock-refractory VF. The patient survives with good neurological outcome. It highlights the multidisciplinary cooperation and resources necessary to utilize these heroic practices.

Colchicine is known to be effective in treatment of recurrent pericarditis, but until recently its efficacy during the first attack of acute pericarditis has been uncertain.

A recent multicenter, double-blinded, RCT of patients with acute pericarditis found colchicine to be effective in reducing the rate of incessant or recurrent pericarditis (primary outcome), as well as the rate of hospitalization. Here are some highlights:

Colchicine is a safe and effective drug for the treatment of acute pericarditis. Consider adding colchicine to conventional therapies to reduce duration of symptoms, recurrences, and rate of hospitalization.

Do you know the ECG findings of pericarditis and how to differentiate from other causes of diffuse ST-segment elevation? Check out these previous ECG videos to refresh your memory...

ECG findings in Pericarditis vs. STEMI

Title: Is there a Malignant Form of Early Repolarization?

*Please see the attachment below for Figures A-D

Adult ED patients are commonly found to have markedly elevated blood pressures (>160/100) without any signs or symptoms of acute organ injury (ie, cardiovascular, renal, or neurological).

A recently revised ACEP clinical policy aims to guide emergency physicians in the evaluation and management of such patients.

There's little evidence to guide the decision of which patients with markedly elevated blood pressures to test or treat in the ED. This new clinical policy suggests that routine screening and treatment is not required. Asymptomatic patients should be referred for close follow-up, but consider a BMP in patients with poor follow up.

Title: Is there superiority among the different types of cardiac stents?

Patients with a mean HbA1C 7-7.4% were compared to those with mean HbA1C <6%; tight glycemic control had a 68% increased risk of CVD hospitalization

CVD risk and all-cause mortality is greater with both aggressive and lax glycemic control and the optimal reference range may lie between 7-7.4%

The spectrum of radiation-induced cardiac disease is broad

~20-30% of these patients (*institutional dependent) are considered poor candidates for surgery and receive only medical management, which innately results in substandard outcomes