Patients may present to the ED with new onset weakness due to myasthenia gravis (MG). A group that is frequently missed is late-onset MG, which occurs after the age of 50. It is frequently misdiagnosed as a stroke or transient ischemic attach (TIA).

Bonus pearl: Ocular symptoms are present in up to 85% of patients with MG, with unilateral ptosis or asymmetric bilateral ptosis being the most common presentations.

Title: Driving after concussion: Is it safe to drive after symptoms resolve?

Driving after concussion: Is it safe to drive after symptoms resolve?

Title: Subarachnoid Hemorrhage -- Or Is It?

Patient found pulseless after submersion in water for 20 minutes.  After ROSC, patient’s GCS was 3 and pupils are dilated and nonreactive. 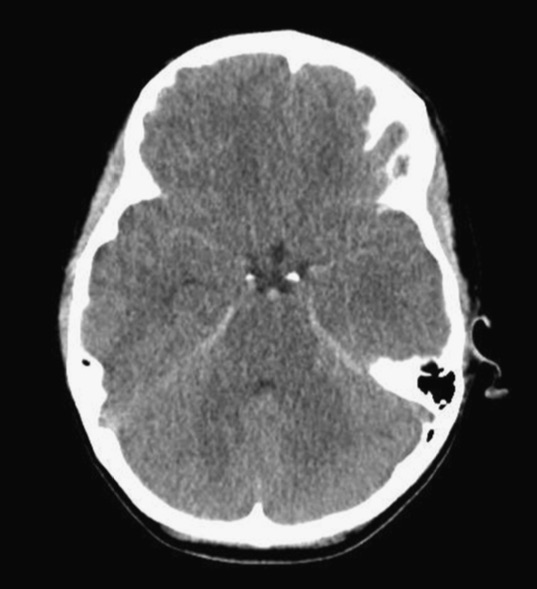 Magnetic resonance imaging (MRI) is the method of choice for imaging the spine for the suspicion of non-traumatic disorder, such as multiple sclerosis (MS), transverse myelitis, epidural abscess, spinal cord infarcts, and spondylotic myelopathy (changes in the spinal cord due to disk herniation or osteophytes in degenerative joint disease).

If the differential diagnosis includes infection, neoplasm, demyelination or inflammation, then IV contrast should be administered.

The Brain Trauma Foundation (BTF) Guidelines for the Management of Severe Traumatic Brian Injury (TBI) was recently updated and published in September 2016.

For the executive summary and complete guidelines, go to https://braintrauma.org/guidelines/guidelines-for-the-management-of-severe-tbi-4th-ed#/

Title: PCC before LP in Patients on Anticoagulants?

You have a patient in whom you suspect meningitis, but he is on warfarin for a history of pulmonary embolism. You started empirical antibiotics. His INR is 2.6, and you want to do a lumbar puncture (LP) to confirm your diagnosis. Can you use Prothrombin Complex Concentrate to lower his INR and safely perform the LP?

Using PCC to lower INR to enable LP is relatively safe and effective in patients on vitamin K antagonists. The dose used was individually determined by the physician according to initial INR.

This is a retrospective study, with no control group. One patient (2.7%) had a myocardial infarction that was “possibly related” to the PCC administration.

This is a retrospective study, with no control group.  However, it is the largest study to date that was specifically designed to answer this clinical question, including 37 patients over a 10-year period, with the following results:

- PCC was effective 90% of patients

- The median INR was 2.2 before, and 1.3 after (checked immediately after the infusion)

- The median time from starting the infusion and LP was 135 minutes.

- None of the patients had a spinal hemorrhage or allergic reaction.

- Some patients were started on vitamin K according to the physician’s discretion, with variable starting times of anticoagulation after the procedure (if at all).

Title: What is Ataxia?

Ataxia is an important clinical sign of cerebellar pathology, but how is it actually described?

Stance ataxia: inability to stand with feet together for more than 30 seconds

Sensory ataxia: the first 2 elements, in addition to a positive Romberg sign

Truncal ataxia: oscillation of body while sitting or standing

Limb ataxia: functional impairment in performing actions such as writing or buttoning and improves with slowing down the movement

Nystagmus and other ocular disturbances, such as ocular flutter and opsoclonus.

Title: What's the cause of this patient's hemiplegia?

Patient presents after a fall confused, not moving his right side, but moving his left side spontaneously.  What's the diagnosis? 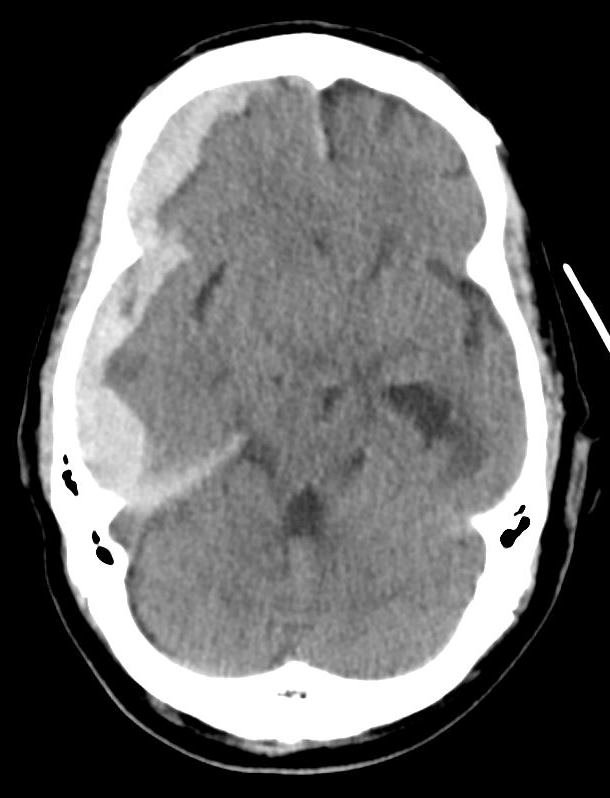 Title: Subarachnoid hemorrhage - How Do you Diagnose It?

Over the past few years, there have been numerous studies discussing the "best" way to diagnose subarachnoid hemorrhage (SAH). These 2016 guidelines review the current evidence.
Classic approach: dry CT, and if negative perform the lumbar puncture (LP)
It is the most common approach, with the most robust evidence. Still considered "standard of care"
Dry CT alone: Sensitivity of a dry CT alone for SAH has increased with improved technology, and the sensitivity is highest when done within the first 6 hours of headache onset. Despite studies quoting a sensitivity of 100% within 6 hours, this evidence is still insufficient due to concerns for selection bias in the study, and the fact that the CTs in the study were read by neuroradiologists.
CT/CTA: CTA is very sensitive for aneurysmal SAH (98% for aneurysms >3mm). CTA would miss non-aneurysmal SAH, but would detect aneurysms that may or may not need to be treated before rupture. It is a reasonable strategy to exclude aneurysmal SAH in select patients, and in patients who refuse LPs or in whom the LP results are equivocal.
Bottom Line: CT/LP is still standard of care, with CT/CTA being an acceptable alternative if LP is equivocal or refused by the patient. CT alone is NOT enough to exclude SAH. 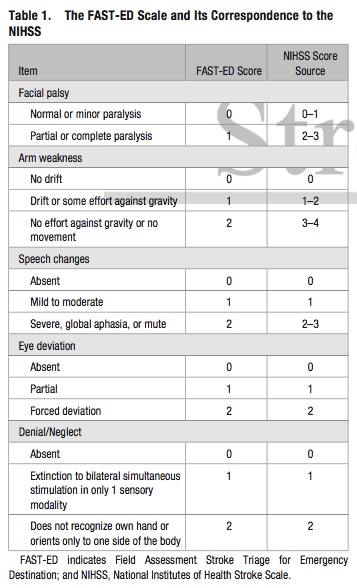 Bottom Line: Additional assessment of gaze deviation, aphasia and neglect, as included in the FAST-ED scale, increases the accuracy of predicting LVOS.

Multiple sclerosis (MS) relapses are defined as new or worsening neurologic deficits lasting 24 hours or more in the absence of fever or infection. Symptoms may be visual, motor, sensory, balance or cognitive. It is a clinical diagnosis, but the presence of a new gadolinium-enhancing lesion on MRI can be used as a radiologic marker of an MS relapse. However, it is unclear whether asymptomatic lesions should be treated, making it prudent to rely on the clinical evaluation rather than the MRI for diagnosis.

Moderate to severe relapses should be treated within 1 week of onset. The mainstay of treatment for relapses is IV methylprednisolone, usually dosed at 500mg to 1g per day for 3-7 days.

Similar symptoms occurring in the presence of fever, heat exposure, stress or infection (such as urinary or upper respiratory tract infections) are "pseudoexacerbations", and should not be treated as an MS relapse.

Title: Should we give platelets in patients with spontaneous Intracerebral bleeds?

The PATCH trail, recently published in the Lancet, looked at whether giving platelets to patients, that were on anti-platelet therapy (e.g.: aspirin, clopedrigrel, or dipyridamole) for at least 7 days at the time of their spontaneous intracerebral hemorrhage, improved neurologic outcomes and mortality.

This was a large (60 hospitals) multicener, open-label, masked endpoint, randomized trial that enrolled a total of 190 patients (97 platelet transfusion and 93 standard care).

Though this is the first study to look at this, the studies design and outcomes should really make use reconsider whether we give these patients platelets. The thought is that ICB or hemorrhagic strokes also have a component of ischemic stroke and a watershed area that's blood flow becomes compromised with the platelet transfusion.

TAKE HOME POINT: We should not routinely transfuse platelets in our patients that were on antiplatelet therapy prior to their ICB.

Title: Gadolinium - To Use or Not Use?

Gadolinium - To Use or Not Use?

Title: Does the Headache Classification Matter in the ED?

Classically, some therapies for headaches are thought to be effective in only certain classifications of headaches, such as triptans in migraines, or oxygen in cluster headaches. This is not necessarily true.

Triptans have been successfully used in cluster headaches, as found in the 2013 Cochrane review.1

More recently, "high-flow" oxygen (referring to 12 L/min of oxygen, delivered through a facemask) has been studied in migraine headaches, with promising results. When compared with placebo (air), oxygen used for 15 minutes was more effective in pain relief and improving visual symptom, with no significant adverse events. 2

Want to learn more about how to read a brain MRI?  Here are the basics:

Stay tuned for more pearls in this series on brain MRI!

Title: First Seizures - Why Don't We Treat Them in the ED?

A 25 year old patient presents to the emergency department (ED) with a first unprovoked seizure. His ED workup is normal and he is back to his baseline, and you plan to discharge the patient with outpatient follow up within 1 week. The patient is requesting to be discharged on an anti-epileptic drug (AED). What do you do?

Educate the patient about the risk of recurrence, and the possible side effects of AEDs!

The American Academy of Neurology (AAN) specifically addressed this in their 2015 guidelines. A few points to remember:

- The risk of recurrence is greatest within the first 2 years, and occurs in 21-45% of patients.

- AED therapy is likely to reduce the risk of a 2nd unprovoked seizure by about 35% over the next 2 years, but the delay in initiating therapy does not increase the long-term remission risk.

Is it different if the patient had multiple seizures within 24 hours?

Title: What Do You Mean By Dizzy?

What Do You Mean By Dizzy? 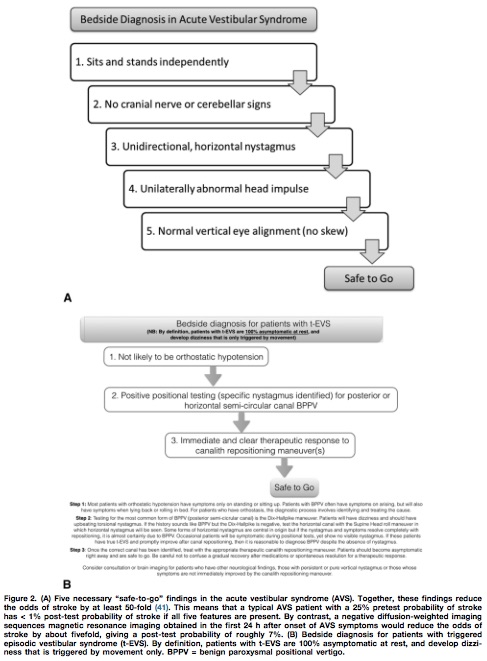 Title: Epilepsy in the Elderly: Is it Different?

Epilepsy in older adults is common, with an incidence equal to (if not higher) than infants.
The most common type is focal seizures, with strokes and neurodegenerative diseases being the most common underlying causes.
Management of epilepsy in the elderly is challenging because of many reasons:
- A large number of disorders may mimic seizures, and 25-50% of patients with presumed epilepsy end up diagnosed with non-epileptic events, such as tremor, non-epileptic myoclonus, syncope, confusion, agitation, cataplexy and limb-shaking TIAs.
- Status epileptics in the elderly has double the incidence of the general population and a significantly higher mortality rate.
- The role of newer anti-epileptics (drugs other than benzodiazepines, phenytoin and phenobarbital) is unclear due to lack of adequate studies in this age group.
- Antiepileptic drug clearance (both renal and hepatic) is affected by normal physiological changes in this age group, increasing the side effects and decreasing tolerance, even to doses lower than usual.